In June 1929 the Venezuelan revolutionary Rafael Simón URBINA secretly arrives on Curaçao with a number of men. He wants to proceed to Venezuela in an attempt to overthrow the reign of President Juan Vicente GOMEZ, but he urgently needs weapons and finances for his attack.

On 8 June 1929 Urbina, his friend Gustavo MACHADO and their men attack the garrison in Willemstad. After a short and bitter fight in which one defender is killed and several others are injured, Urbina takes control of the Waterfort. He seizes a large amount of weapons from the arsenal and steals 3.500 guilders. The Dutch Governor and garrison commander are taken hostage and a merchant ship is commandeered to bring Urbina and his men to Venezuela. On arrival at the coast the merchant vessel is released, with the Dutch hostages on board.

Upon his return to Willemstad the Governor immediately informs the Venezuelan government of the invasion, after which Urbina and his force are met by government forces and defeated.
The Dutch government in the Netherlands is shocked by this blatant attack on the capital of the Netherlands West Indies. Two warships are sent to the islands at once and the garrison is strengthened with a detachment of the Royal Netherlands Marine Corps.

On the islands there is also a strong reaction on the Urbina attack. The well known businessman C.N. ‘Shon Cai’ Winkel organises a meeting on his estate Villa Maria on 23 June, only two weeks after the attack. At this meeting the ‘Vrijwilligers Korps Curaçao (VKC)‘ or ‘Volunteer Corps Curaçao’ is founded, and two hundred men sign on that very first day.
Winkel is also the man who, many years later in 1945, will be invited to act as Chairman of the Committee that starts the project towards realisation of War Monuments on all six Antillean islands. 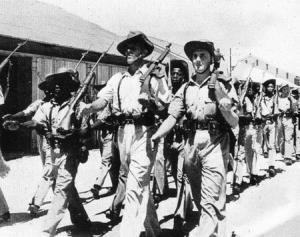 During WW2 the members of the Volunteer Corps served in the Armed Forces, side by side with the Schutters, Army, Navy and Airforce personnel.

Their sacrifice and efforts were crucial in the defense of the islands during WW2, and their names deserve to be remembered.

On these page an overview is given of the names of these young men, their registration or “stamboek” number, the Vrijwilligers Korps in which they served and, if known, their birthplace and -year.